And then the unthinkable happened… These are the stories I still tell just so folks know that sometimes the universe does catch me off guard, and also to stress how important it is to be prepared and not panic in the various situations that come your way.

On my drive back from New Orleans to Memphis, which is a pretty straight forward 5.5 hour drive, I ended up stopping randomly off the highway for a snack and water. The drive had gone smoothly thus far and I was pleased with the good timing of it all.

Then, when I got back to my car to hit the road again, it would not start. “Hmmm,” I thought instantly, because there were no warning lights or any other indication that this would be a problem. After a few more attempts (and silent prayers) I got out of my car and approached the friendly couple next to me. “Do you happen to have jumper cables?” I asked. They shyly said no and felt bad about it.

“Dammmnit” I thought to myself. In that moment another man walked up and said he had some jumper cables. “I’m saved!!!!” I thanked him as he went to go pull his car up to mine. He attempted to jump it, but it didn’t look like the battery was the issue. After several failed attempts, my mind started formulating a Plan B.

Right next door, there was a dealership and repair shop. We weren’t sure if they were open, but I saw in the distance someone was walking from their car to inside the building, so I thought it was at least worth a shot. The gentleman didn’t want to leave a lady alone in unfamiliar territory, especially if I did end up stranded. He said “You don’t want to be out by yourself at night in these parts….”

“Grrrrrrrreaaaaat,” I thought to myself, in my most sarcastic inner voice I could muster up with an imaginary eye roll too. I’m sure that a year ago, this situation would’ve freaked me out completely. I’m sure I would’ve been frozen trying to figure out my next move. But I guess there is something about venturing across the country driving solo that makes you experience the best and worst of road trips. I’ve driven through complete states in pitch black darkness without recalling every scary movie in my head, I’ve been close to empty with no gas station in sight and only dry, mountainous terrain with my fingers crossed, and I’ve also been low on oil with no right for my car to have gone as far as it did, and yet somehow we both survived.

So while I was cautious and used my good ol’ fashioned common sense, I was still incredibly calm and my mind immediately laid out the options for best and worst case scenarios. That gentleman and I walked over to the dealership repair shop. The repair men joined us and walked back to my car with their own battery jump. We all quickly determined (again) that it wasn’t the battery. Our attention turned to the faint noise coming from the starter. Since they weren’t familiar with my make or model, there wasn’t much else they could do. They recommended I call a friend in Memphis (I was about 90 minutes out) and leave the car here or have it towed to the nearest Hyundai dealership, which was about 45 minutes away. None of those options seemed to appealing.

I thanked everyone and said I have AAA membership so I’ll give them a call to handle this. At this point, I was expecting to be stuck, or overnighting somewhere I really didn’t want to be. So close to my destination and yet so far. As a constant reminder of the coming night fall, the sun was setting perfectly behind me.

“Fuuuuuuuuuudge,” I thought, and I guess you the reader should know by now that in my mind I dramatically draw out a lot of words. I called AAA and we play the game of finding out where on earth in the country I was. Well it wasn’t Tennessee like I thought. It was actually Mississippi….. Grenada, Mississippi to be exact (and thank you, Mr Random Police Officer, for passing by slowly with the city name on your car). Goodness, I couldn’t even tell you what exit I got off of from the highway. How many times do we randomly stop without knowing where we are? Apparently for me, quite often! I tried pointing out the other establishments that were near me; because I was on my phone I didn’t have direct access to my GPS.

Eventually they directed me to the right person who could help. And this next part you may not believe, but I promise you its true. He said to me “I think we can troubleshoot your car while we’re on the phone, before jumping to the conclusion of needing a tow.” I was dumbfounded. Seriously? Like you would troubleshoot a computer with tech support? And with that, he had me place my car in park, hold down the break, and turn the car only to On. Then turn it off. Then start her up.

And like some kind of crazy magic trick, she started right up and everything was fine. Apparently the last time I parked, my car didn’t recognize it was in park, and that caused some issues for starting up again. I still don’t think I understand the full story of what went down here. I thanked him repeatedly and told him of my view of this setting sun and the lurking feelings of me needing more than just a Plan B for the night. We shared a few laughs and that was it.

I drove the car over to the dealership repair shop just to tell them everything was okay. I was determined not to turn the car off until I made it safely back to Memphis, so I literally just popped in to say “thank you!” and then hit the road. 90 minutes later I rolled into Memphis, exhausted with thoughts of what might have been. I did actually make one little stop near my apartment before settling into home. To the liquor store for some well deserved local brews, and with that I winded down for the evening. 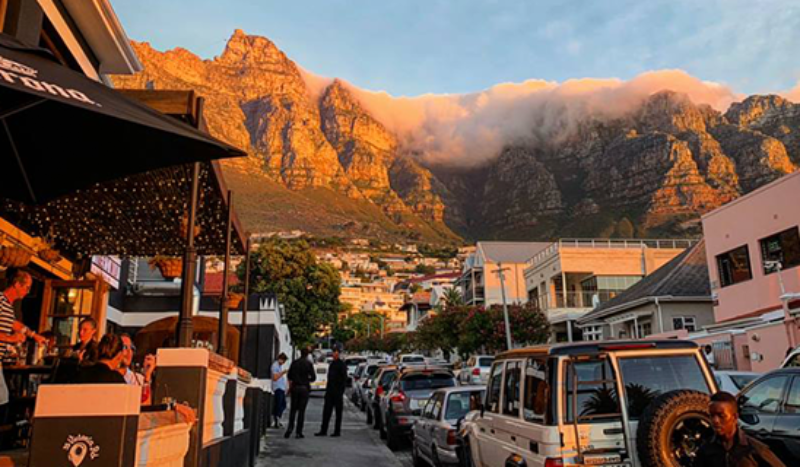 Sunrise and Sunset in Cape Town